The Blog Ring of Power Presents...
An Interview with Author Matthew Cox

Today we have an interview with author Matthew Cox via BRoP member Vicki Lempe Weavil. This is a return visit for Matthew who is celebrating the release of his third novel (but first young adult novel), Caller 107. Feel free to leave a comment or question for Matthew below, and when you're done here, pop on over to the other BRoP sites to read the rest of the interview. This interview is also part of the Caller 107 blog tour, so be sure to check out all the other stops and enter the giveaway!


BRoP: With more published books under your belt, have you found that your writing process has changed at all? Any new habits or tricks that you’ve developed since your last book was released?
Matthew: Well, my overall process hasn’t changed much… I am still an outliner. I still assemble the document in the same way. I have started using headers in word to keep the chapters straight, and not relying so much on page breaks.

BRoP: How do you balance the various demands that come with being a working writer (writing new work, editing finished work, marketing published work, etc.)?
Matthew: So far I’ve tended to react to whatever was right there in front of me at the time. When I’m drafting (working on a new MS for the first time) I tend to shut out everything else until that’s done. Then, I let it sit for a while and do other things before going back through for a first self-edit. As far as marketing goes… I’m still feeling like a fish out of water.

BRoP: When do you balance being a writer with other parts of your life?
Matthew: There’s other parts of life? (Aside from the necessary day job) Generally, I will write if nothing more pressing is going on. Once a week, I usually have game day with friends – but other than that, I usually write. Sometimes I take a break and veg on a video game or movie; but that’s usually right after typing “The End” on something. :-)

BRoP: What is the strongest criticism you’ve ever received as an author? The best compliment?
Matthew: I think the strongest criticism I received was on an early draft of Virtual Immortality (the one I wrote first). Some people I’d given it to read thought the descriptions of certain things were too long. I was still feeling my way around writing at that point, and after over a dozen revisions, managed to tame it down without losing atmosphere.

It’s difficult for me to put a finger on the best compliment – I am thrilled whenever someone says they liked something I’ve written. However, I think if I had to pick something for purposes of this question, it would be when a reader told me that they’d just gone through their day thinking about how Kirsten (from Division Zero) would react to their life.

BRoP: How does it feel to have additional books published? Does having more books out there feel different than having just one?
Matthew: It does… I have heard a few people say that it’s a sign I’m not a one off :-)


What format is your book(s) available in (print, e-book, audio book, etc.)?
Both

Blog | Facebook | Goodreads | Twitter
Born in a little town known as South Amboy NJ in 1973, MATTHEW COX has been creating science fiction and fantasy worlds for most of his reasoning life. Somewhere between fifteen to eighteen of them spent developing the world in which Division Zero, Virtual Immortality, and The Awakened Series take place. He has several other projects in the works as well as a collaborative science fiction endeavor with author Tony Healey. Matthew is an avid gamer, a recovered WoW addict, Gamemaster for two custom systems (Chronicles of Eldrinaath [Fantasy] and Divergent Fates [Sci Fi], and a fan of anime, British humour (<- deliberate), and intellectual science fiction that questions the nature of reality, life, and what happens after it. He is also fond of cats. 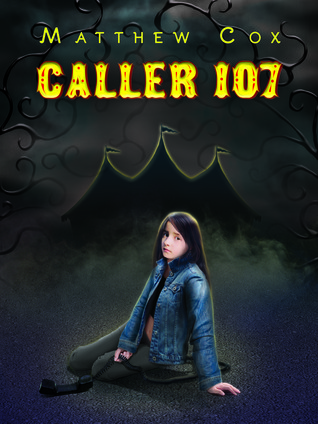 CALLER 107: When thirteen-year-old Natalie Rausch said she would die to meet DJ Crazy Todd, she did not mean to be literal.

Two years is a long time to be stuck between two people who want nothing more than to destroy each other. A tween crush on the larger-than-life jock from a local radio station is the only trace of a once-happy life ruined by warring parents.

Whenever WROK 107 ran a contest, she would dive for the phone, getting busy signals and dead air every time. She never expected to get through, but at least with her best friend at her side, it used to be fun.

Before her parents ruined that too.

Her last desperate attempt to get their attention, falling in with a dangerous group of older teens, goes as wrong as possible. With no one left to blame for her mess of a life but herself, karma comes full circle and gives her just a few hours to make up for two years’ worth of mistakes–or be forever lost.

GET IT NOW:
Goodreads | Amazon


This is part two of a five-part interview. Be sure to check out the other BRoP sites for the rest of the interview:
Part 1 @ Vicki Lemp Weavil
Part 3 @ T.W. Fendley
Part 4 @ Emily LaBonte
Part 5 @ Sandra Ulbrich Almazon

This interview is part of the Caller 107 Blog Tour. Be sure to check out the other stops and enter the giveaway!