The Blog Ring of Power Presents...
An Interview with Author Cary Caffrey

Author Cary Caffrey is here today to talk about his debut novel, The Girls from Alycone, and to share some words of wisdom with fellow authors. And our apologies to Cary - several of the BRoP members were impacted by Hurricane Sandy, which delayed the posting of this interview. :-(


This is part three of a five-part interview. Be sure to check out the other BRoP sites for the rest of the interview:
Part 1 @ Teresa's site - Thursday, October 25
Part 2 @ Emily's site - Friday, October 26
Part 3 @ Sandra's site - Monday, October 30
Part 4 @ Dean's site - Tuesday, October 31
BRoP: Tell us about your route to success – how did you land your agent/publisher?
Cary: It's funny, but the one thing I knew I didn't want for this project was a publisher. Working in the music industry has made me extremely cynical about publishers. Amazon has revolutionized self-publishing. They've given all writers access to a global market previously unheard of. It's a completely transparent process, and very, very easy. I wish there had been something like this back in the day when I was still an independent musician.

So, the route I wanted to take was pretty clear - rather than submitting to trad-publishers I knew I wanted to give Kindle Direct a shot. The fact that it worked and that the book sold as well as it did is still a shock to me.

BRoP: What are the most important elements of good writing?
Cary: Honesty. A writer with the courage to open themselves up, expose their innermost secrets and write something real, personal and from the heart - those are the writers I want to read.

BRoP: What tools are must-haves for writers?
Cary: The ability to turn on and off your inner-critic. Shut it down when you're writing. Turn it back on when it's time to edit and rewrite. Learn to listen to it, argue with it and trust it.

Also, I really believe you've got to be a true student of all media - not just your favorite genre. You may want to write literary fiction, but that doesn't mean you can't learn something from heading to the movies once in a while or turning on the TV. Read everything you can, watch everything, and do it with a critical eye. Ask questions. Take notes. Discuss!

When I did my MFA I was amazed by the number of writers in the program who flat out refused to watch television or go to movies or read anything outside their chosen genre. I think that gives you a pretty limited view of the world around you. It's incredibly helpful to see what other creative professionals are doing in other mediums and how they're succeeding. And never be jealous of success. Study it!

When I read a book or see a movie, I'm constantly asking myself, what worked, what didn't work and why? My wife's the same way, which is great, because we're always discussing what we read and watch and play (hey, there's even great writing in games, these days).

BRoP: Do you have any advice for other writers?
Cary: Argh - without sounding horribly preachy - if you want to be treated like a professional, then you need to learn to act like one and how to present yourself as one.

If you're self-publishing, then that means taking on the mantle of publisher (not just writer). That means taking care of hiring real professional editors and cover-designers (not just your sister who's good with photoshop or a good proof-reader).

I cringe when I see talented writers upload good manuscripts to Amazon without first hiring an editor. I hear all the excuses: "I can't afford it," or "When my book is successful, I'll hire an editor."

Hey, you only get one chance to make a good impression.

Personally, I treat my writing as a business, and that means making an investment in myself and my work. I firmly believe I wouldn't have sold a fraction of the number of books if I hadn't found my talented editor. It was an investment that paid for itself tenfold.

BroP: What do you feel is the key to your success?
Cary: I'm very impatient. I'll never wait around to be discovered. I've always been happy to self-produce/publish. I really believe this has lead to a lot of opportunities I wouldn't have had if I'd waited to be endorsed by a label or publisher.

BRoP: Do you have anything specific that you want to say to your readers?
Cary: I'm still shocked and thrilled that I have readers! To them I'd like to say, thanks for reading!

BRoP: What are your current / future project(s)?
Cary: I'm working on three projects right now. Of course I'm working on the sequels to TGfA (books two and three are still in the works). I'm also working on a book/movie script I'm very excited about. It's set in 1957's and it's about a woman officer in the Royal Canadian Air Force who's assigned to a remote NORAD missile tracking station in the Aleutian Islands. It deals heavily with the gender politics of the era (her posting is not greeted with enthusiasm), but it's also got a very hefty SciFi twist. It's heavily influenced by my love for 60's pulp-sci-fi and my love for Mad Men, of all things. It's going to be gritty. It's going to be sexy. And it's going to be very, very scary!

All I can say is that what they track at the station turns out to be far more startling than missiles.

BRoP: What format is your book available in (print, e-book, audio book, etc.)?
Paperback and Kindle, both exclusively through Amazon 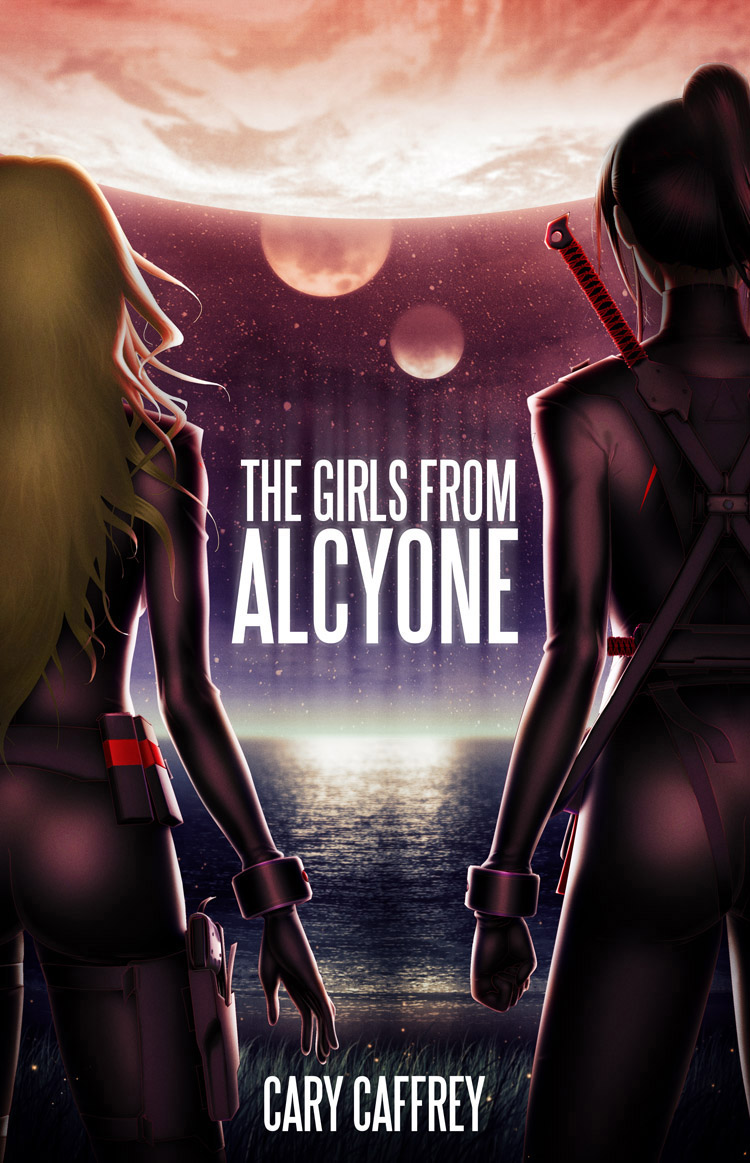 THE GIRLS FROM ALYCONE: Sigrid and Suko are two girls from the impoverished and crime-infested streets of 24th century Earth. Sold into slavery to save their families from financial ruin, the girls are forced to live out their lives in service to the Kimura Corporation, a prestigious mercenary clan with a lineage stretching back long before the formation of the Federated Corporations.

Known only to Kimura, the two girls share startling secret-a rare genetic structure not found in tens of millions of other girls. But when their secret becomes known, Sigrid and Suko quickly find themselves at the center of a struggle for power. Now, hunted by men who would seek to control them, Sigrid and Suko are forced to fight for their own survival, and for the freedom of the girls from Alcyone.
актуальное об отдыхе
создание сайтов