The Blog Ring of Power Presents...
An Interview with Author Jason Jack Miller

Author Jason Jack Miller is here today to talk about his novels, including Hellbender, and share some words of wisdom with other aspiring authors.


This is part five of a five-part interview. Be sure to check out the other BRoP sites for the rest of the interview:
Part 1 @ Teresa's site - Thursday, November 22
Part 2 @ Emily's site - Friday, November 23
Part 3 @ Sandra's site - Monday, November 26
Part 4 @ Dean's site - Tuesday, November 27
BRoP: Tell us about your route to success –how did you land your agent/publisher?
Jason: The thing is, I always wanted to write more than anything. Otherwise I wouldn't have spent two years pursuing a Master's degree in Writing Popular Fiction. But years of writing endless queries and sorting out who accepts simultaneous submissions and who is only looking for YA vampire fiction wasn’t doing it for me. It sucked the fun out of everything I’d worked on since 1998. I just wanted to be a plain old writer—somebody who gets to write and release the stories that he loves. Somebody who gets to live and breathe to create. I knew that submitting was part of the process, but it was killing me.

It’s ironic, I suppose, because self-publishing made writing fun for me again. After releasing the novel on my own I went to bed with stories in my head for the first time in years. I didn’t have to think about markets, which agents had gone to which houses. Self-publishing let me see myself in the day-to-day of the craft. It let me talk to readers who gave me the encouragement to keep going. Yeah, I had to format my own book. So what? I didn’t query Raw Dog Screaming Press. I sent them a finished product that had been well-formatted and proofed. I didn’t sell them on an idea. I showed them. And all those hours I spent tweaking fonts and spacing and cover art became an asset to my career, not a detriment.

Working with a publisher has been an absolutely amazing experience, even if it did make me question my southwestern Pennsylvanian dialect. The education I received by doing it myself taught me one thing--I learned that if I had waited until AFTER I'd been published to figure out my marketing plan and who my readers were, and how to interact with them and on and on, I would've waited too long.

'Published' and 'self-published' are temporary states. And the biggest thing to happen to me in 2011 was realizing my novel was good enough to be read even when I couldn't win an agent's approval. Stepping out of the queue and taking action is a trait I respect in writers, musicians, performers, and artists, regardless of their abilities. The capacity to take action is a permanent state, much unlike the states of 'published' and 'self-published.'

BRoP: Do you have any advice for other writers?
Jason: Make friends in this business. As many as possible. Go to conventions and conferences. The idea of a writer working alone is a romantic one, but not very practical. I'm lucky to be married to a writer, but most of the people that I'm closest to are writers as well. Former mentors and colleagues, people I went to grad school with, former students, people who belong to the same writing organizations I do, other Raw Dog Screaming Press writers and, of course, the editors, designers and marketing people at Raw Dog. And when a bunch of writers get together it's a hell of a lot of fun.

Having a network can often pay off in big ways. You're going to need blurbs one day, reviews. Make friends and be social and it'll pay off. Through Raw Dog's John Edward Lawson I met Sam McCanna of Scurvy Ink (http://skurvyink.com/) who ended up designing an awesome T-shirt for Hellbender.  When you surround yourself with creative types, you have no choice but to create.

BRoP: What do you feel is the key to your success?
Jason: My old man railroaded and my father-in-law worked in a steel mill. My grandparents railroaded, mined coal and farmed. I think I was eight or nine the first time I helped bail hay on my great-grandmother's farm. At the time it was unpleasant, but in the end it made me the type of writer who can sit down and work for six or seven hours. I think that blue-collar ethos permeates everything I do, whether it's spending the morning marketing or an afternoon outlining.

Along those lines, The Beatles played hundreds of marathon sets in Hamburg from August 1960 to December 1962 before recording Please Please Me in January 1963. Being on stage most of their waking hours helped them hone their craft in a way most bands back in Liverpool never could've dreamed of. Working on the basics night after night, perfecting their stage presence, building a repertoire…. I knew that I couldn't go wrong following in those footsteps.

BRoP: What are your current / future project(s)?
Jason: I'm very excited to be working through another draft of The Revelations of Preston Black, the next book in the Murder Ballads and Whiskey series after The Devil and Preston Black and Hellbender. If The Devil and Preston Black boils down to a 'deal with the devil' story, the theme of Revelations is 'better the devil you know than the one you don't.' The gang heads south to the land of red-eye gravy and grits, and in order to shake the hellhounds on his trail, Preston ends up at the crossroads where Robert Johnson made his deal with the devil.

This is the first time I wasn't really introducing a whole bunch of new characters, so I get to build in new and unexpected ways.

Blog | Facebook | Goodreads | Twitter | Amazon | Raw Dog Screaming Press
JASON JACK MILLER hails from Fayette County, Pennsylvania, as in, "Circus freaks, temptation and the Fayette County Fair," made famous by The Clarks in the song, "Cigarette." He is a writer, photographer and musician. An outdoor travel guide he co-authored with his wife in 2006 jumpstarted his freelancing career; his work has since appeared in newspapers, magazines, literary journals, online, as part of a travel guide app for mobile phones, and in a regular column for Inveterate Media Junkies. He wrote the novels Hellbender and All Saints during his graduate studies at Seton Hill University, where he is now adjunct creative writing faculty. In 2011, he signed a multi-book deal with Raw Dog Screaming Press. When he isn't writing he's on his mountain bike or looking for his next favorite guitar. He is currently writing and recording the soundtracks to his novel, The Devil and Preston Black, and writing his next novel, The Revelations of Preston Black. 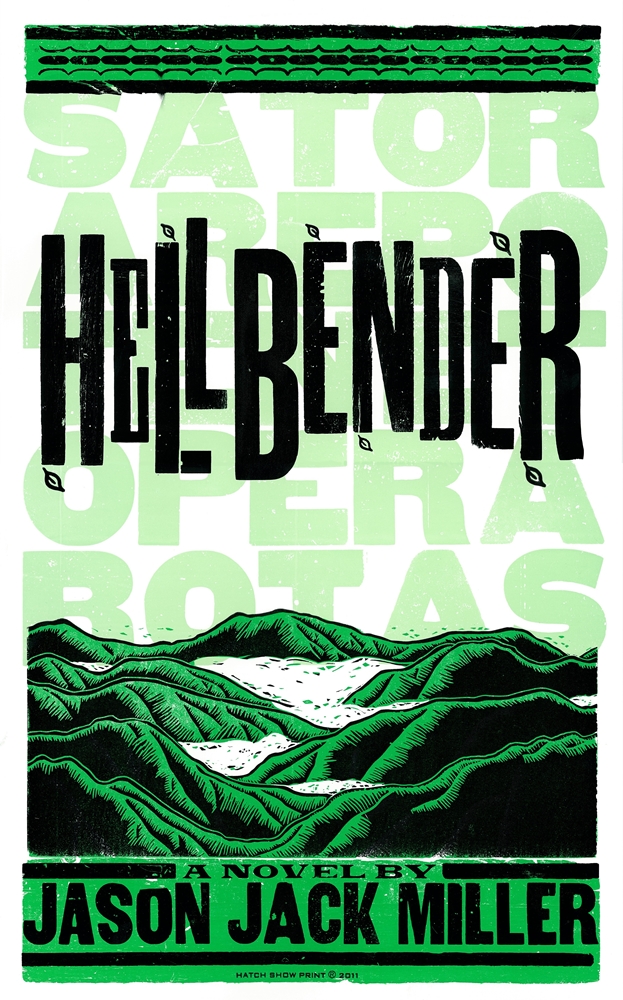 HELLBENDER: Although the Collins clan is steeped in Appalachian magic, Henry has never paid it much attention. But when his younger sister dies mysteriously Henry can’t shake the feeling that the decades-old feud between his family and another is to blame.

Strange things are happening at the edge of reality, deep in the forests and mountains of West Virginia. Let Jason Jack Miller take you to a place where love is forever even when death isn’t, where magic doesn’t have to be seen to be believed, where a song might be the only thing that saves your soul.