The Blog Ring of Power Presents...
An Interview with Author Joshua Legg

Today, I have for you an interview with fellow Agent Query Connect member, Joshua Legg, via BRoP member Vicki Lemp Weavil (Vicki's first interviewee for the BRoP - yay!). I've been hearing about Joshua's book for some time now, and I look forward to reading it - it definitely sounds intriguing! And I love the cover! Please give Joshua a warm welcome!

This is part two of a five-part interview. Be sure to check out the other BRoP sites for the rest of the interview:
Part 1 @ Vicki Lemp Weavil - Tuesday, October 1
Part 3 @ T.W. Fendley - Thursday, October 3
Part 4 @ Emily LaBonte - Friday, October 4
Part 5 @ Sandra Ulbrich Almazon - Monday, October 7

BRoP: What is your writing process? Do you follow a regular routine? Do you use pen and paper or computer? Work at home or at the library/Starbucks, etc.
Joshua: I don’t follow a routine with my writing. Some days I won’t even look at my notes and drafts, other days I sit and obsess. Most days are thankfully in between, with brief moments here and there spent hammering away at a draft or editing something while I try to get something else accomplished. It’s all done at home on my trusty desktop pc, which rests in a comfortable little corner of my room.

BRoP: When do you write?
Joshua: I don’t have a strict writing schedule. On many days, I don’t write at all. Some, I’ll be at my desk from the moment I wake up until I’m too exhausted to stay awake. I’ve even had those moments where I wake up at 3 a.m. with an unquenchable need to continue writing that didn’t let go until noon the next day.

BRoP: What has been the most surprising reaction to something you’ve written?
Joshua: When I first met my editor, she admitted that she lost track of time and her editing as she got absorbed by my story and lost five hours to just reading. It was the very first time anyone had admitted to liking my story that much, since before that, a few friends and relatives actually stopped speaking to me after I had sent them earlier drafts of the novel. I’m sure it had nothing to do with the sudden loss of contact, but you never really know.

BRoP: Other than your family, what has been your greatest source of support?
Joshua: My best friend has been at my back from the very beginning of this process. In fact, as “Etched” developed, I created a character based on them in gratitude. Even now, as I take these first few steps in the land of being published and writing sequels, the support has only grown stronger.

BRoP: How do you deal with rejection and/or negative reviews?
Joshua: I had over 120 rejections for “Etched” before my publisher took a chance on me. My first few rejections honestly left me a bit crestfallen, but I never took it personally. It’s a tough business, after all. I eventually just shrugged them off and just hoped the next query would get a positive response.

So far, I’ve been extremely lucky with “Etched” and have had no negative reviews. But I know you can never please everyone in this world. I’m not sure how I’d react to someone giving a hateful review, but if it’s constructive criticism or well reasoned dislikes, I won’t feel too bad. Everyone’s entitled to their own opinion, after all.

What format is your book(s) available in (print, e-book, audio book, etc.)?
E-book, available at all major e-book retailers as well as the publisher’s website.

Twitter
JOSHUE LEGG resides in San Antonio, Texas with his dog, Ruby. He studies history and English, as well as about a dozen other subjects. His debut novel “Etched in Soul and Skin” was released this year by Musa Publishing. 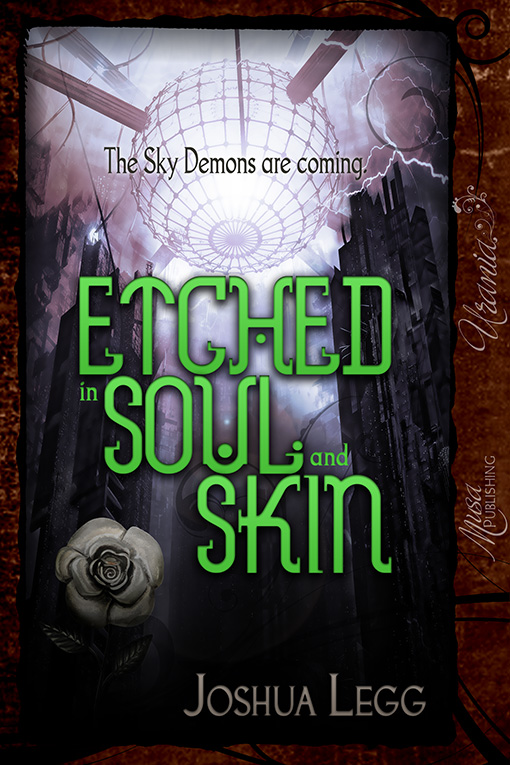 ETCHED IN SOUL AND SKIN: The Sky Demons have hunted Adanna's tribe for centuries, kidnapping people in vicious nighttime raids and disappearing without a trace. Her life has been one of deprivation and loss, always striving to keep one step ahead of relentless attackers.

Erik is the newest soldier in a secret military, one dedicated to keeping his steam-powered city in the air. Only a select few know the dark secret of his flying home. It's not their technology that keeps it aloft, but the magic that flows in the veins of the people who live below them. He has been trained for one purpose: to hunt and retrieve human beings.

Captured and almost turned into a living battery, Adanna is rescued by the very man who imprisoned her. In her, he sees a chance at redemption. In him, she sees a chance to escape. And maybe get a little revenge for the years of terror the 'sky demons' have inflicted on her.