The Blog Ring of Power Presents...
An Interview with Author Katherine Lampe

Today, we have an interview with paranormal fantasy author Katherine Lampe via BRoP member T.W. Fendley. Katherine is here to share some words of wisdom to other aspiring writers and to tell us a bit about her latest novel, The Cruel Mother, Book #5 of the Caitlin Ross series.

This is part five of a five-part interview. Be sure to check out the other BRoP sites for the rest of the interview:
Part 1 @ T.W. Fendley - Thursday, October 10
Part 2 @ Emily LaBonte - Friday, October 11
Part 3 @ Sandra Ulbrich Almazon - Monday, October 14
Part 4 @ Vicki Lemp Weavil - Tuesday, October 15

BRoP: Tell us about your route to success –how did you land your agent/publisher?
Katherine: Well, I’m an Independent. So I’m my own agent and publisher, as well as my own editor and copy-editor and proofreader and book designer. It’s probably three times as much work as the traditional model, so it’s not for the faint of heart. And Independents still carry a whole bunch of stigma in the publishing industry. That’s the main reason I don’t use the term “self-published.” People, even people who should know better, still hold onto the notion that the only reason an author might not attract a traditional publisher is because his or her work is bad. That people who go the Independent route consider themselves “Special Snowflakes” with first drafts so awesome that they need to be made available to the general public without any kind of editing or proofreading being done. And it’s just not true. You do find that attitude among some Independent authors. But then, you can also find completely horrible, badly-edited and barely-proofed books that major publishing houses have released. So the idea that the only reason you wouldn’t get a traditional publishing contract is that you can’t write doesn’t hold up.

I tried for a long time to get that traditional publishing validation, and I never succeeded. And part of the reason I never succeeded is that most agents and publishers never even get as far as reading actual manuscripts. They rely on pitches and queries and synopses, all those short little blurbs that are meant to convince someone that your book is saleable. If you hook someone with a pitch, they might read the first couple hundred words of your manuscript, just to see if you actually know how to construct a sentence. Well, I have this quaint belief that my work should be judged on its own merits and not on the ability of a pitch to attract attention. So the more I tried to construct successful pitches and queries, the angrier I got about the whole process. It made me very ready to try a different approach when my friend Stef suggested I look into Smashwords. And going the Independent route is the best thing I ever did for myself. I don’t have to ask anyone’s permission to tell stories anymore. I don’t need anyone to validate my identity as an author. I know what I am, and I tell the stories I want to tell.

BRoP: What are the most important elements of good writing?
Katherine: The first three things that pop into my head are technical skill, impeccable grammar, and a giant vocabulary. These are your brushes and palette. It makes no difference at all how much vision you have if you can’t express it coherently. After those, I would place an organized brain and a self-critical mindset. You have to be able to keep track, one way or another, of the pieces of your story and the logic of how they fit together. And you need to question yourself constantly: “Does this work? Is it clear? Does it make sense that my character would do that?” If you lack the capacity to ask those questions, if you indulge in the idea that somehow the act of putting words on paper (or virtual paper) elevates you to a place above criticism, you risk turning out a manuscript that accomplishes nothing beyond stroking your ego.

BRoP: What tools are must-haves for writers?
Katherine: I don’t think any tool is as important as the knowledge of how and when to use it. I love my thesaurus and I use it all the time. But I’ve seen work where the writer has obviously substituted a ten-dollar word for one more commonplace because it sounds elegant, without the least idea of the connotations that make it an inappropriate choice. I guess when it gets right down to it, I believe the choices of physical tools are as individual as writers themselves. Something that’s indispensable to one is not going to work for another, and you have to discover what’s going to work for you. So the one tool that every writer absolutely must have isn’t a material thing. It’s self-knowledge. Which is a thing you keep on acquiring over and over again throughout life.

BRoP: Do you have any advice for other writers?
Katherine: Don’t get too comfortable. When writing is going well, when the words are flowing out without your seeming to think about them, it feels good. It’s a high, like you’re transcendentally connected to some larger part of the Universe, the place where stories live. I admit, that feeling is a huge part of why I write. When I don’t have it, either because I’m between projects or because I’m in a difficult scene. I crave it. I want it back. But it’s a danger as well as a pleasure, because pursuing it, considering that feeling the reality of the writing experience, can lead you to skip the difficult parts of the work. Some parts of writing don’t feel good, and it’s a mistake to think that they should.

BRoP: What are your current / future project(s)?
Katherine: I know there are going to be at least four more books in the Caitlin Ross series. Possibly more, because there’s a huge gap in the internal timeline, between the spring of 2010 and the summer of 2013, and I don’t know, yet, what goes in there. Right now, I’m working on the sixth book in the series, Demon Lover. I’m eight chapters into the first draft, which is about a third of the way through, and it deals with the appearance in Gordarosa of one of Timber’s old lovers just at the time Caitlin is about to give birth to their first child. It’s somewhat different from the other books in the series. So far, I’ve stuck to a first person perspective, Caitlin’s. But I realized I wasn’t going to be able to deal with all the issues in this book through Caitlin’s perspective, so in Demon Lover her point of view alternates with Timber’s. It’s both challenging and interesting. Caitlin is very up front, very dry and droll, even when things get tough for her. She narrates in the first person, but she maintains a certain distance from events. Timber is almost the opposite. He lives completely in the moment, and his brain never stops. Also, he only rarely thinks of himself by name. So his chapters are all third person, present tense, almost as if he’s reciting this continuous monologue. I’ve explored this before, in short stories from his point of view, and I’m told reading it is like sitting between Timber’s eyes. Anyway, it’s going quite well so far, and I’m hoping Demon Lover will become available in the winter of 2014.

What format is your book(s) available in (print, e-book, audio book, etc.)?
All my books are available in both print and electronic format.

Website | Blog | Facebook | Goodreads | Twitter | Amazon | Smashwords
When she was twelve years old, KATHERINE LEMPE was thrown out of Sunday School class by her minister father for advancing a symbolist interpretation of the story of the expulsion from Eden. This marked the beginning of her career as an Iconoclast, which she pursues on a daily basis by asking difficult questions until people run away in terror. As a writer, she is a staunch proponent of the Independent movement and is outspoken against the sexism, classism, and narcissism often found in traditional publishing. Her Caitlin Ross series of paranormal novels follow the adventures of a witch married to a shaman in Colorado, and explore problems ranging from abuse of power to dysfunctional families. The fifth in the series, The Cruel Mother, was released in September, 2013, and Katherine is currently working on the sixth, to be titled Demon Lover. 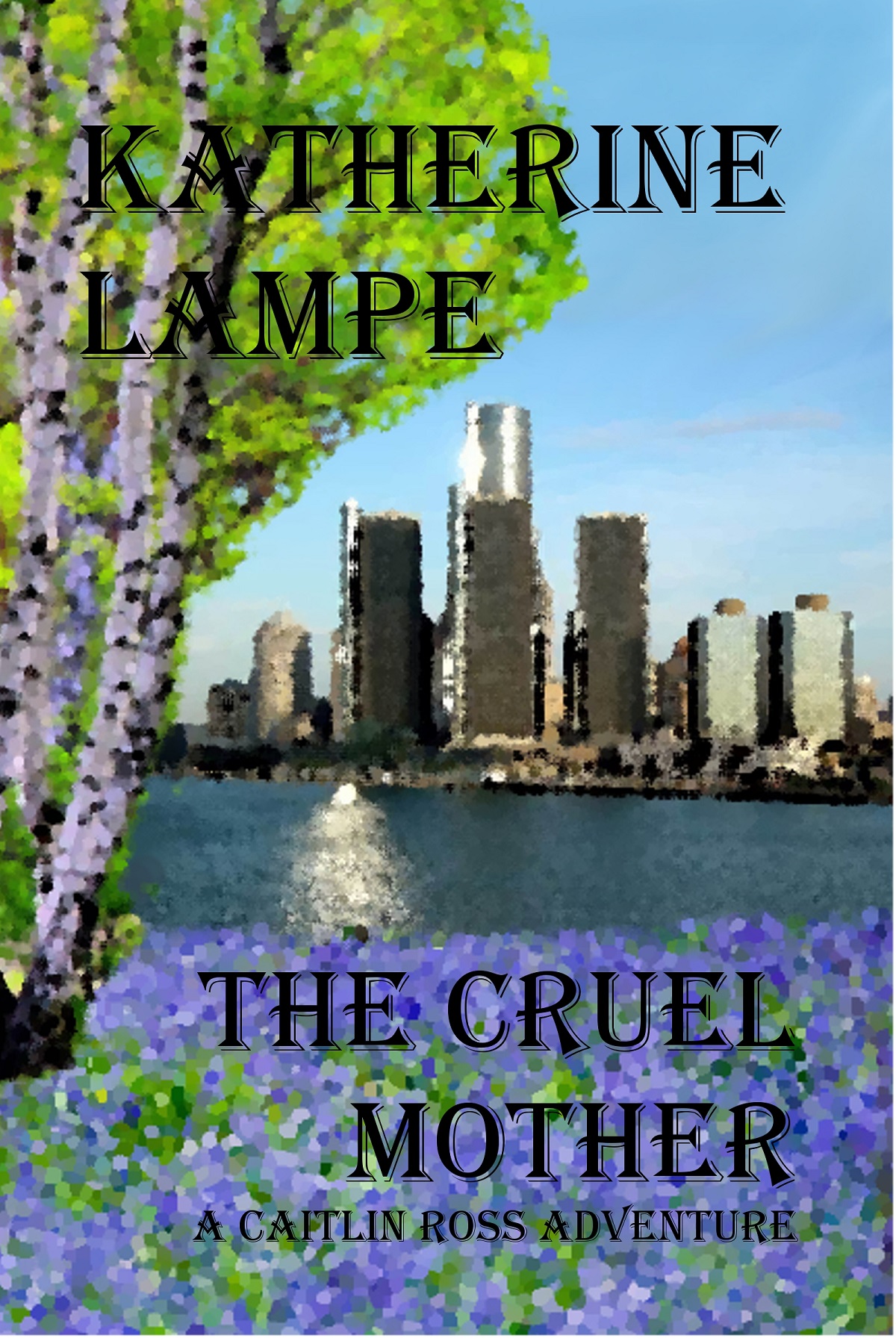 THE CRUEL MOTHER: When Caitlin Ross was fifteen, her mother had her committed to a mental institution in hopes of curing her of magic. After a sympathetic psychiatrist helped Caitlin secure her release, she left her family, and ever since she has kept as much distance between herself and them as possible. But when her sister calls to tell Caitlin her mother is dying, she yearns for some kind of reconciliation and chooses to return to her childhood home. In Detroit, Caitlin runs into her former psychiatrist, who asks for her help with one of his patients, a troubled teenaged girl. Although Caitlin at first refuses to get involved, escalating family tensions drive her to visit the girl as an escape. Discovering the source of the girl’s problems will lead Caitlin into a world she’s only imagined, one that holds a startling revelation about her own origins