Interview with Alys B. Cohen

The Blog Ring of Power Presents...
An Interview with Author Alys B. Cohen

Today I'm thrilled to bring you an interview with author Alys B. Cohen. I met Alys through AgentQueryConnect and am so happy to see her books being released. While the description may not sound like it, her Sacred Blood series is actually speculative fiction. You'll have to read it to find out how! Feel free to leave a comment or question for Alys below, and when you're done here, pop on over to the other BRoP sites to read the rest of the interview.

BRoP: Tell us about your new book and when it is out? Where can people purchase it?
Alys: Sacred Blood has two plot lines that meet up and go forward together though the characters have different goals.  This makes a quick summary difficult.  However it is ultimately the story of an abused 18-year-old who goes from scared of the world to a strong woman who will make tough decisions to better herself for herself first.

Right now Sacred Blood is on Amazon in e-book format, and will be available in print soon.  I’ve funded a print run, and will list those once they’ve arrived.

BRoP: Is there anything new, unusual, or interesting about your book? How is it different from other books on the same subject?
Alys: Unlike other books with supernatural elements, the human character will not remain the weakest link, nor will she desire to become a member of the supernatural world.  The hero of Sacred Blood will not be who you expect, nor will you see the plot twists that keep occurring until the final pages.

My good characters aren’t portrayed as perfect, nor are their faults the faux-faults authors often give.  Characters can only have “clumsy” as their fault so many times before it’s cliche.  These characters will fight and say stupid things they regret.  They are a diverse cast.

The bad guys have their humanizing moments.  It’s easy to see them as pure evil (I think I’ve done well in creating some of the most vile bad guys), but they have their moments where you could see yourself grabbing a beer or a soda and playing video games with them.

I don’t see these things often in books.

BRoP: What was the hardest part of writing this book?
Alys: I so wanted to see a certain ending for Juliette.  However the ending needed to be different.  I had to balance a happy ending with a sad ending to create opposing emotions in the reader at the same time.

BRoP: What was your favorite chapter (or part) to write and why?
Alys: In an early chapter, Juliette and Tristan, who are new friends, have a moment between them of intimacy without needing to get physical.  Juliette opened up about her life, and they have a moment of attraction, but must reign it in.

Her escape is a known part of this book.  So I’m not spoiling anything here....  Post-escape, she has an entire scene where she says nothing.  This entire scene is nothing but the dialog of one other person with her speaking in body language.  This was a challenging scene to write, but one that is very realistic for someone dealing with trauma.

BRoP: Did you learn anything from writing this book and what was it?
Alys: There’s a good chance your friends and family won’t see your book as as big of a deal as you do.  I expected more excitement among my friends.  One pointed out that, to most people, this is no bigger of a deal than someone else learning a new skill in the kitchen, or learning to reupholster the couch, and those things don’t usually come with a lot of attention.  This drove home two points.  First is not to expect many people to think it’s a huge deal to publish, and the other is that people who haven’t written books to the point of publication really can’t understand just how much time goes into it.

BRoP: If you had to do it all over again, would you change anything in this book?
Alys: No.  As it is, this book went through more than 30 editions and was more than a year in editing until I was finally satisfied.

BRoP: Is there a message in your novel that you want readers to grasp?
Alys: No one deserves abuse.  Jerks don’t get to bank points for being nice that they can use to offset jerkish behavior later.  Sometimes a step in the right direction can be a harder step than staying the dangerous course.

BRoP: Tell us about your book’s cover – where did the design come from and what was the design process like?
Alys: The title refers to Juliette’s blood being different, special because it’s human.  I needed a cover that showed her blood in some way, and so I came up with something from the climactic scene of the book.  One I decided on the arrow, I knew exactly what I wanted.

Since I couldn’t find an arrow I liked, I made my own.  I found a branch that was the perfect size, used hemp cord, and then--here’s the big thing--my own blood.  I couldn’t find any fake blood I liked.  I laid the arrow on a bed of leaves and took several pictures with my phone.  After this I gave myself a crash course in Photoshop.  I still don’t know how I did it all. 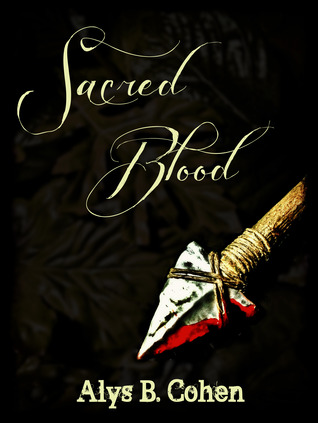 SACRED BLOOD: Abused and frightened, Juliette St. Claire has never known love or kindness in her eighteen years. Meeting Tristan LaRocque changes that, infuriating her cruel boyfriend, Nathaniel Jensen. But Tristan is powerless to help Juliette when merely trying could result in her death.

As threats to her life intensify, Juliette uncovers the mystical secrets they have both kept from her, and she must make some tough choices about the men she thought she knew.

Fiercely passionate and profoundly riveting, Sacred Blood is an outstanding story that will leave you rethinking love, friendship, and everything you hold dear.

GET IT NOW:
Goodreads | Amazon


This is part four of a five-part interview. Be sure to check out the other BRoP sites for the rest of the interview:
Part 1 @ Emily LaBonte
Part 2 @ Sandra Ulbrich Almazon
Part 3 @ Vicki Lemp Weavil
Part 5 @ T.W. Fendley

# Alys B. Cohen 2014-04-14 14:43
I'm so honored, Terri. Thank you so much for your support!!
Refresh comments list
JComments
актуальное об отдыхе
создание сайтов