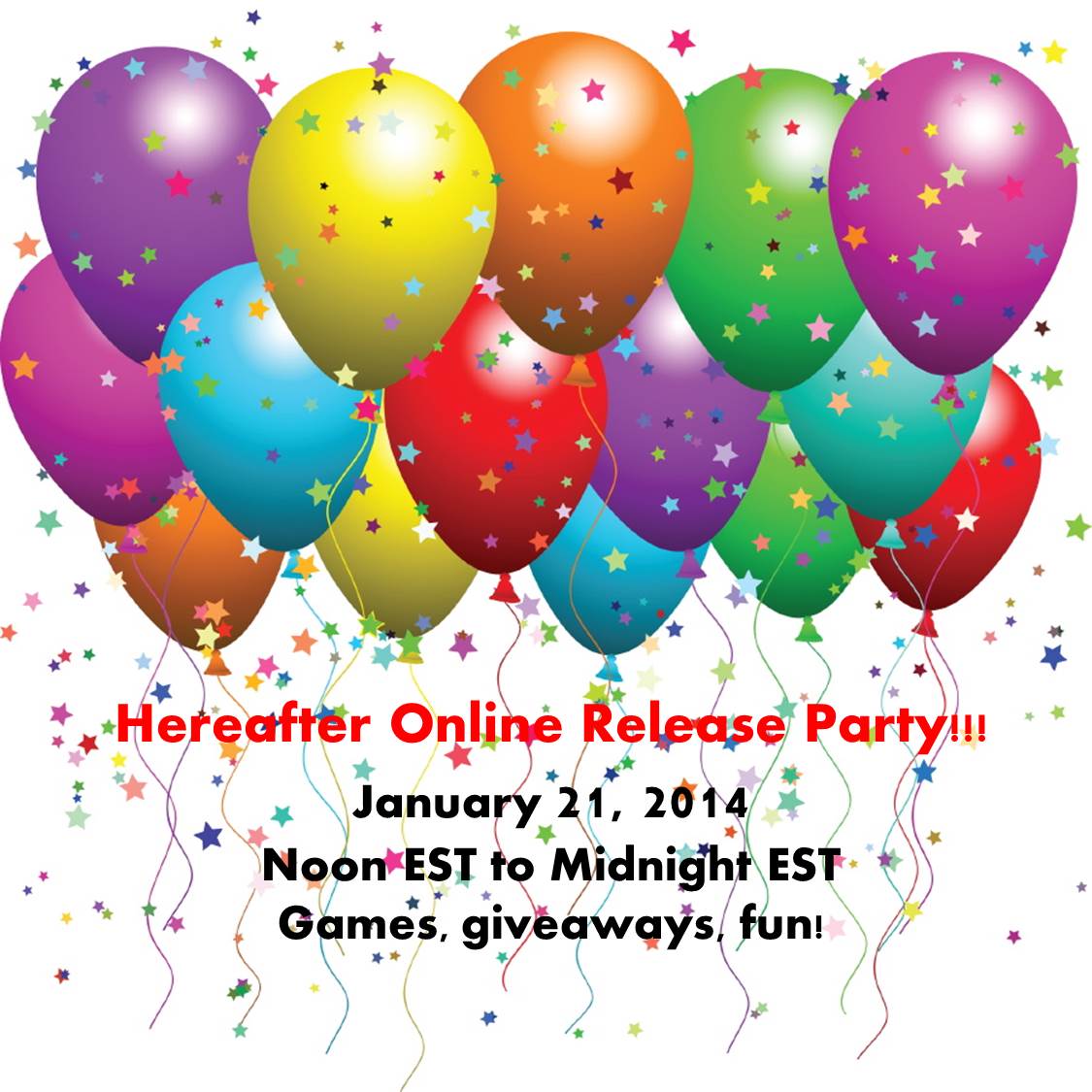 Hereafter is once more running free in the wild, and to celebrate, I'm throwing an online launch party - and everybody is invited! There are going to be giveaways - hosted by celebrity guest authors - going on all day long, I'll be answering questions from readers, and cover artist Shelby Robinson will also stop by to take part in a Q&A. So come on by and lift a glass of (virtual) champagne in honor of Hereafter's release!

2. The event works a bit like a chat room - there will be multiple threads/wall posts going on, each featuring a various celebrity guest and a game/giveaway. Enter as many contests/giveaways as you like - just read the instructional post at the top of each thread and then jump into the conversation.

3. New contests/games will be revealed every hour, so check back frequently! Check here to see the schedule of celebrity guests who will be appearing.


To celebrate the re-release of Hereafter, I'll be visiting the following blogs today in a one day blitz tour:

I'm so grateful to this great group of bloggers for supporting me and Hereafter by hosting me today. I would love it if all of you reading this post can stop by as many of the blogs as you can and leave a comment during my tour as a way of thanking the bloggers for their support.

And don't forget - tomorrow is the Hereafter online launch party on Facebook. Be sure to stop by - I've got a dozen special guests, including cover artist Shelby Robinson, lined up, plus games and giveaways. It's going to be a blast!

TERRI BRUCE writes science fiction and fantasy stories with a literary bent from a haunted house in New England where she lives with her husband and three cats. Look for her contemporary fantasy Hereafter (Afterlife #1) available wherever books are sold.


So, as you know, there was this thing over the summer and I ended up getting the rights to my books back and now I'm self-publishing them, starting with re-releasing Hereafter in January.


There were a couple of small snafus with guest posts during the Birthday Bash Blog Tour. Due to a small mix up, two site hosts both got the same guest post, when in fact, Bookin' It Reviews should have gotten this post on "Veneration of the Dead Festivals" (I apologize for the mix up, Talina!). Also, the full text of the "My Best Birthday Memories" post can be found here. Lastly, if you missed the "Ghosts, Beans, and Parentalia" post at Vivi Dumas's site (which did get posted), please check it out. I was particularly proud of that bit of ghostly research. :-)affiliate tracking url | Nike Air Force 1 , Sneakers , Ietp STORE


So…what exactly is going on with Hereafter and Thereafter?

I’m so glad you asked!

I’ve been sitting on this news for a while because there were a lot of moving pieces that weren’t in place, and I didn’t want to announce anything until I had firm release dates. And now that I have all the pieces and some set release dates… drum roll please…short url link | Nike
Read more: Hereafter and Thereafter (Re) Release Dates Set!

In Case You Missed It: Birthday Bash Blog Tour

So, it's my birthday (yay!), and it's Hereafter's six-month anniversary since release (YAY!), AND it's the feast of Parentalia (say what?), so I figured it was time to throw a party...and you're all invited! YAAAYYYYYY!!!!